The job outlook is the estimated growth of any career over a period. This period is usually 10 years long and the statistics are provided by the Bureau of Labor Statistics. They also predict future data based on present and past data. Some of this includes – which industries will hire more, how many jobs will open, how much the average salary is expected to rise and many such other predictive studies. Thus, the job outlook plays a very important role while you choose your career. Check out the job outlook of private and public detectives below. 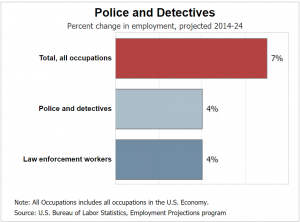 First, let’s talk about the growth in the fields. There were about 106,000 public detectives or criminal investigators on record in 2015. On the other hand, there were only about 30,000 private investigators holding a job at the same time. There is a predicted growth of 5% in the industry of private detectives. This means that there will be about 1,500 new jobs open by 2025. This growth rate is following the average growth rate of 5% across all other sectors. On the other hand, for public investigators, this figure is at 4%. This means there is going to be around 4,000 more jobs as a criminal investigator by 2025. This too is an average rate of growth.

The steady increase in employment is mainly due to the increase in population. As the population increases, more people need to be protected and more criminals need to be caught. However, with stricter laws and more advanced technology being use, the crime rate isn’t increasing that significantly. Thus, both the phenomena almost balance each other out leading to an average growth in both these careers.

Geographically speaking, Texas, California and New York employ the highest number of Criminal / Law Enforcement Investigators. Western states and Texas show more employment here than the eastern ones. Private detectives are prominent in California, Texas and Florida with the southern states tending to employ more compared to the northern ones.

Let’s move on to the industries that hire most of these two professionals. As clear as day, The Local, State government and the Federal branch employ the most number of criminal investigators. On the other hand, private detectives are usually hired by Security Services, Consulting services and occasionally by the local government for consultation on a few cases. 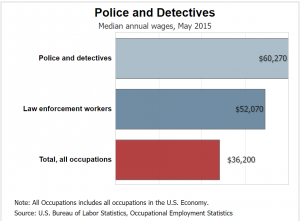 Comparing with different industries again, we see that for private industries, the most employing industries do not pay the highest. In fact, Electromedical, Navigational, Power generation, Metal Product forming and other such industries paid the most for private detectives since they had the most sensitive information to protect. Moving on to Public Investigators, federal agencies, postal services, and educational institutes pay the most.

Hopefully, this article helped you understand everything there is to know about the job outlook of detectives. However, if you still want to find out more, visit BLS site for more information on Private Detectives and Criminal Investigators. With all the information in hand, you’re on your way to becoming a detective yourself in no time.

Pursuing A Career As A Detective?

Perfect! Let's get you matched with college programs in your area.

Law Enforcement is a rewarding and lucrative career option.

It doesn't cost anything to check out local programs!

OK, Let's Check It Out